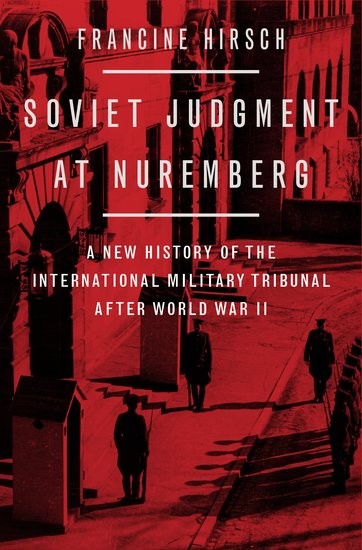 Congratulations to Professor Francine Hirsch on receiving two recent awards for her 2020 book, Soviet Judgment at Nuremberg: A New History of the International Military Tribunal after World War II (Oxford University Press). The book has received the 2021 Heldt Prize from the Association for Women in Slavic Studies, as well as the Barbara Jelavich Book Prize from the Association for Slavic, Eastern European and Eurasian Studies.

The Heldt Prize is given for the best book by a woman-identifying scholar in any area of Slavic, Eastern European, and Eurasian Studies:

“This deeply researched, clearly written, and engaging history of the Nuremburg trials offers a significant reappraisal of the Soviet role in this international court. Hirsch corrects traditional historiography’s tendency to focus almost exclusively on Allied involvement in these proceedings by examining the important contribution of the USSR in the construction of the Nuremburg court and its legacy. Hirsch makes a compelling case for her new interpretation of what the Soviets did achieve, and what they did not. Probing issues of international diplomacy at the conclusion of World War II, she sheds new light on the origins of the Cold War and the establishment of key concepts and protocols regarding the definition and prosecution of war crimes. This compelling study also offers a singularly rare instance of a woman scholar making an exceptional contribution to a field that is overwhelmingly male-dominated.”

The Barbara Jelavich Book Prize is given for a distinguished monograph published on any aspect of Southeast European or Habsburg studies since 1600, or nineteenth- and twentieth-century Ottoman or Russian diplomatic history.

Soviet Judgment at Nuremberg was also recently given a laudatory write-up in the New York Review of Books.