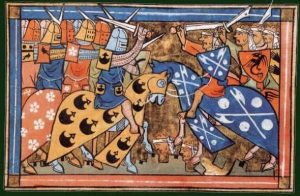 This past Sunday, December 8th, Professor Elizabeth Lapina was interviewed on Wisconsin Public Radio for a segment titled “Knightly Culture and the Crusades.” The host was Norman Gilliland, who co-produces the weekly WPR program  “University of the Air.” Lapina delved into the questions about how the crusades began, what the crusaders were trying to achieve, and how successful they were. The segment also touched on topics such as how the experiences of the crusades affected the moral standards of knighthood, as well as the relationship of Muslims and Christians in the Middle East.