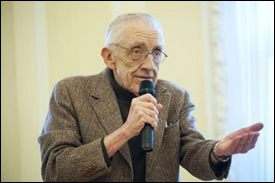 Professor Emeritus Alfred Erich Senn, age 83, passed away peacefully on Tuesday, 8 March, 2016 in his home, surrounded by his family.

Alfred Erich Senn was born in Madison, Wisconsin 12 April, 1932. His Swiss father, Herr Dr. phil. Alfred Senn and Lithuanian mother, Marija Eva Vedlugaite, along with sisters Marie and Elfrieda Senn had newly emigrated from Lithuania to the US. Al’s father joined the German department at the University of Wisconsin, Madison after a very brief stint at Yale. When Al was 7, his father accepted a position with the German department at The University of Pennsylvania and the family moved to Bala-Cynwyd, Pennsylvania. Al grew up speaking Polish, Lithuanian, Russian, and German in his home and English in school.

Al was deeply interested in Eastern European political history, WWII espionage in Switzerland, and later the influence of politics on sports. He received a BA in 1953 from the University of Pennsylvania and then both an MA (1955) and Ph.D. (1958) from Columbia University in Soviet Studies. He taught at the University of Wisconsin-Madison from 1961-2008 and retired as Professor Emeritus. He also taught as Doctor Honoris Causa at Vytautas Magnus University in Kaunas.