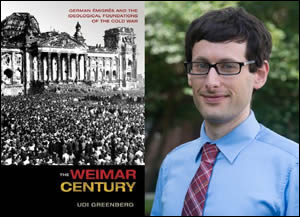 Free and open to the public.

In this talk, Udi Greenberg (Associate Professor, Dartmouth) will explore some of the surprising intellectual, political, and institutional forces that shaped Germany’s reconstruction after World War II and the broader ideological foundations of the Cold War. Tracing the careers of influential German émigrés of diverse theoretical and political backgrounds, the talk will show how political ideas from interwar Germany were fundamental in molding the postwar order in Europe. It will also reflect on the lasting influence that such ideas had on U.S. Cold War thought and diplomacy around the globe.

Hosted by the History & Politics Seminar, and co-sponsored by the Mosse Program and the Center for European Studies.