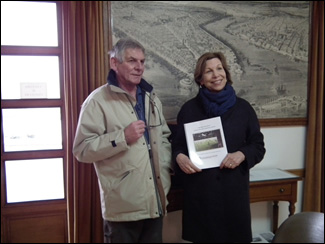 This project began with an email from Monsieur Joel Houot, a French citizen from the village of Val d’Ajol to Mary Louise Roberts, professor of History at the University of Wisconsin, Madison. Mr. Houot wrote to Professor Roberts, an historian of the American G.I.s in Normandy, to request information about Robert Kellett, an American G.I. buried in Épinal military cemetary, located near his home.

Professor Roberts decided the research requested by Mr. Houot might make a good extra credit project for one of the students in her lecture class History 357, The Second World War. She presented Mr. Houot’s appeal to the class, showing them Val d’Ajol on Google maps, and reading aloud an English translation of his email. The students were touched by the request. When it came time to volunteer, every hand in the room went up. So Professor Roberts wrote back to Mr. Houot requesting more names of soldiers resting in the U.S. military cemetary in Épinal. Two weeks later, an email arrived from Jocelyne Papelard-Brescia, the director of the ‘parrainage’ or gravesite adoption program at Épinal. A retired elementary school principal, Madame Papelard-Brescia started the adoption program in 2012. She sent Professor Roberts the names of several soldiers, describing them as “boys buried in Épinal World War Two U.S. cemetary.” Most exciting to the students was the fact that all the soldiers were from their home state of Wisconsin. 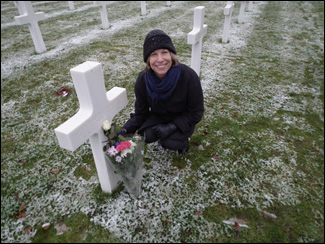 In this way, the Épinal project was born. Over the course of the semester, 43 students worked on “their” boys from Wisconsin. We were lucky enough to have a first-rate genealogist, Joyce Nigbor, auditing the class. Joyce’s research knowledge proved invaluable. The teaching assistant for the course, Jennifer Gramer, gave generously of her time at every stage of the project. Finally, the United States Army could not have been more helpful. Erica Elaine Wilson, Corinne E. Hagan, and Susan M. Kilianski worked hard to cut through red tape and make the IDTP file (Individual Deceased Personnel File) for each soldier available in record time. We are so grateful to these three amazing women and to the entire staff at the Freedom of Information Act\Privacy Act Office Human Resources Command for their help with this project!

The email, reproduced here in French and English, was as follows:

Good day, Madame. I live in the village of Val d’Ajol in the Vosges, not far from the American cemetary of Quéquement in Dinozé-Épinal, where 5255 American soldiers repose, having died for our freedom. I belong to an association which allows you to “godfather” one or several gravesites of soldiers. It is our obligation to honor and put flowers on their final resting place. We have the names and the regiment number of these heroes, as well as their state of origin. As for me, I am ‘godfather’ to the gravestone of Robert Kellett, number 01061440, who served in the 315th infantry regiment of the 79th infantry division. He was killed on the 20th of November on French soil. If he still has some family, would you please help me to find them? Unfortunately I do not speak English and I do not know how to go about this kind of research. Thank you!

The Épinal Project – An Email from Corinne Hagen

It is with sincere appreciation that I send this response to you. I want you and your students to know that your project touched the hearts of multiple family members who stopped to read about your soldiers. Grief seems to be such an individual and often isolating experience, but your research and the compassion that was conveyed through your narratives established connections with those who read your stories. These soldiers became more than just a name carved on a piece of stone or listed on a piece of paper. They became real people with loved ones who were part of a community and their stories generated cathartic memories and discussions. The brother of an unaccounted-for soldier from Korea remarked how this rekindled his hope that the younger generation wouldn’t forget these men. He expressed fears that his brother will never be brought back to U.S. soil because “it just isn’t like when I grew up and everybody had a friend or close family member who was in the service. People just don’t care so much about this sort of thing.” He related that his son will probably continue to push the government to look for his brother, but added that his son was no “spring chicken”. The sister of a WWII soldier stated that she had promised her mother on her deathbed that she would continue to seek information about her brother and get him buried in the family plot. She related that it was now her turn to die and she hadn’t fulfilled her promise. She wished her brother was one of the men buried in Épinal because at least then she would know that someone was caring for him. After reading the story about Dominic Giovinazzo, a man remarked, “Our families came from all over to settle in this country. These boys are from Wisconsin, but it could just as well have been my uncle. My family was from Italy too.” The former spouse of a soldier who remains unaccounted-for from Vietnam was visibly moved by PFC Hinrichs’s story and the compassion expressed by the former combat medic. She remarked, “we are family despite the passage of time or the conflict,” adding that her sense of helplessness surrounding his death still haunts her. It was years before she accepted he was never coming back. All of the stories were read, but unfortunately time doesn’t allow me to comment on each one. What I do want you to know, however, is how powerful this was to those who remembered similar experiences, such as, where their loved one took basic training, recalling the personal effects parents received, circumstances surrounding the soldiers’ enlistments, or the difficulty mothers frequently had accepting the loss of a child and how it affected the surviving siblings. You touched many lives and I truly applaud your effort! You gave these family members hope that their soldiers are as real to others as they are to them and hope that they will not be forgotten. Thank you!!