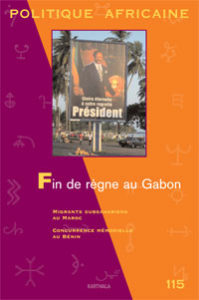 Professor Florence Bernault just guest-edited a special issue of France’s international flagship journal in African Studies, Politique Africaine on the recent events in Gabon (Equatorial Africa). Last June, Omar Bongo Ondimba, the longest serving president of sub-Saharan Africa, died. With him, a much criticized regime of 40 years ended. Or did it? The presidential elections in August 2009 installed his son, Ali Bongo, at the head of the state, confirming France’s decried influence on this oil-rich country. In addition to the 2009 elections, the issue analyzes many facets of popular politics in Gabon, from mounting discontent against the reigning oligarchy to the role of rumors and political fetishes. Bernault co-authored a long introduction to the volume with Joseph Tonda, Professor of Sociology at the University of Gabon-Libreville, as well as an article. Says Bernault: “Completing the volume within three months of the presidential elections was quite a challenge. But it’s important to offer tools of analysis to scholars and observers of this region in Central Africa, where crises of political succession often deteriorate in ethnic wars. Thanks to the support of the UW-African history program, much-needed historical depth could be brought to the arguments presented in the issue.” The special issue of Politique africaine will be launched at a public conference in Paris on December 17.