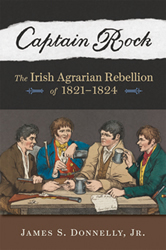 Named for its mythical leader “Captain Rock,” avenger of agrarian wrongs, the Rockite movement of 1821–24 in Ireland was notorious for its extraordinary violence. In Captain Rock, James S. Donnelly, Jr., offers both a fine-grained analysis of the conflict and a broad exploration of Irish rural society after the French revolutionary and Napoleonic wars.

Originating on Viscount Courtenay’s estate in west Limerick, the Rockite movement spread quickly to portions of six other counties under the impact of an intense economic depression. The insurgency embraced not only the rural poor but also many of the better-off farmers. The intensity of the Rockites’ grievances, the frequency of their resort to sensational violence, and their broad appeal on such key issues as rents and tithes presented a nightmarish challenge to Dublin Castle—prompting in turn a major reorganization of the police, a purging of the local magistracy, the introduction of large military reinforcements, and a determined campaign of judicial repression. A great upsurge in sectarianism and millenarianism, Donnelly shows, added fuel to the conflagration. Inspired in part by prophecies of doom for the Anglo-Irish Protestants who ruled the country, the overwhelmingly Catholic Rockites strove to punish the landed elite and its allies, whom they viewed as oppressors.

Drawing on a wealth of sources—the reports of policemen, military officers, magistrates, and landowners, buttressed by newspapers, pamphlets, parliamentary inquiries, depositions, rebel proclamations, and threatening missives sent by Rockites to their enemies—Captain Rock offers a detailed anatomy of a dangerous, widespread insurgency. An understanding of its distinctive political and cultural contours will force historians to expand their notions of how agrarian militancy operated and of how it influenced Irish nationalism in the years before the Great Famine of 1845–51.