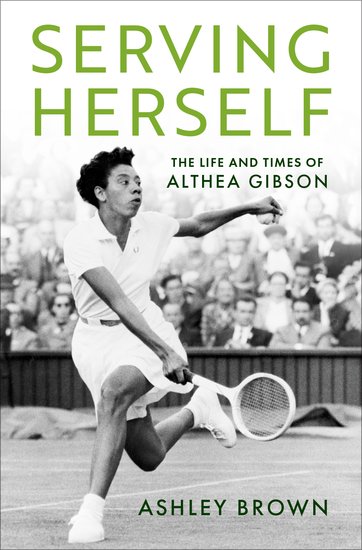 From her start playing paddle tennis on the streets of Harlem as a young teenager to her eleven Grad Slam tennis wins to her professional golf career, Althea Gibson became the most famous black sportswoman of the mid-twentieth century. In her unprecedented athletic career, she was the first African American to win titles at the French Open, Wimbledon, and the US Open.

Serving Herself: The Life and Times of Althea Gibson by Ashley Brown is the most comprehensive biography of Althea Gibson, set against the major historical developments of the twentieth century. Based on previously unpublished archival sources, news media accounts, and oral histories, Brown’s book offers a nuanced examination of a woman’s experiences as an elite athlete.

A compelling life and times portrait, Serving Herself offers a revealing look at the rise and fall of a fiercely independent trailblazer wo satisfied her own needs and simultaneously set a pathbreaking course for Black athletes.