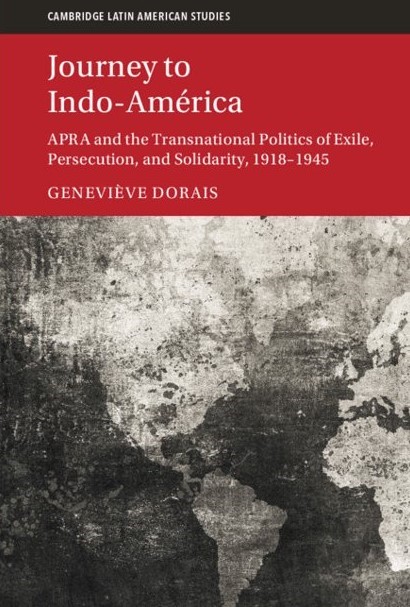 Congratulations to alumna Geneviève Dorais (Ph.D. 2014) on the publication of her new book, Journey to Indo-América: APRA and the Transnational Politics of Exile, Persecution, and Solidarity, 1918–1945 (Cambridge University Press, 2021).

“The American Popular Revolutionary Alliance (APRA) was a Peruvian political party that played an important role in the development of the Latin American left during the first half of the 1900s. In Journey to Indo-América, Geneviève Dorais examines how and why the anti-imperialist project of APRA took root outside of Peru as well as how APRA’s struggle for political survival in Peru shaped its transnational consciousness. Dorais convincingly argues that APRA’s history can only be understood properly within this transnational framework, and through the collective efforts of transnational organization rather than through an exclusive emphasis on political figures like APRA leader, Víctor Raúl Haya de la Torre. Tracing circuits of exile and solidarity through Latin America, the United States, and Europe, Dorais seeks to deepen our appreciation of APRA’s ideological production through an exploration of the political context in which its project of hemispheric unity emerged.”

Geneviève Dorais is a professor of history at Université du Québec à Montréal. Dorias’ book is based on her dissertation completed at UW-Madison, “Indo-America and the Politics of APRA Exile, 1918-1945” (advised by Professor Emerita Florencia Mallon and Professor Emeritus Steve J. Stern).