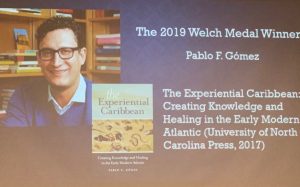 Pablo F. Gómez, Associate Professor in the departments of History and Medical History and Bioethics, has been awarded the 2019 William H. Welch Medal by the American Association for the History of Medicine (AAHM) for his book The Experiential Caribbean: Creating Knowledge and Healing in the Early Modern Atlantic (University of North Carolina Press, 2017). The Welch Medal is awarded to the best book in the field of medical history published during the five calendar years preceding the award. Prof. Gómez received the prize in a ceremony on 27 April 2019 as part of the AAHM 92nd annual meeting held in Columbus, Ohio.