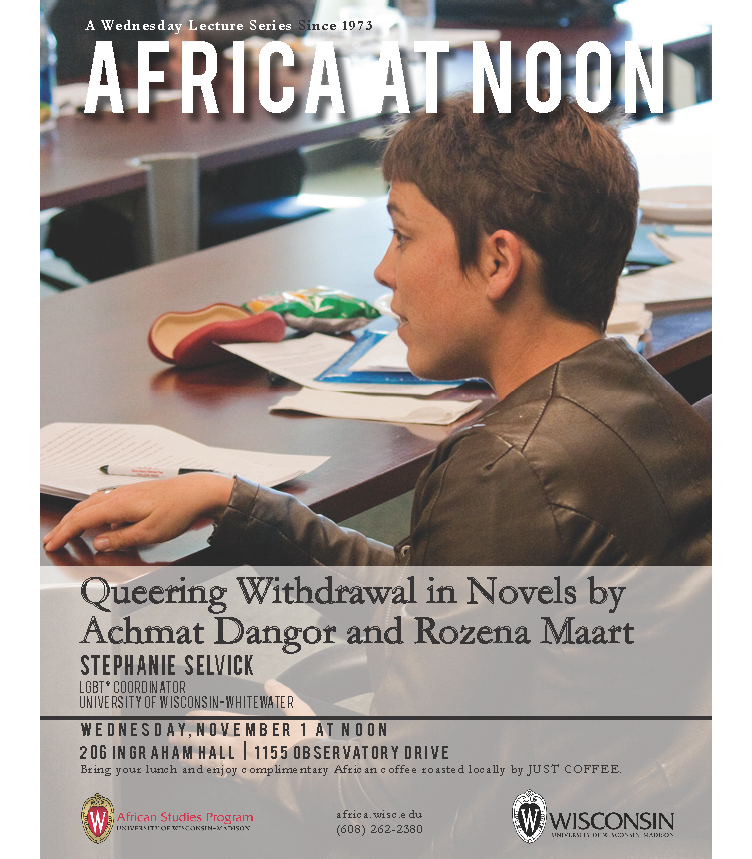 “Queering Withdrawal in Novels by Achmat Dangor and Rozena Maart”

Dr. Selvick will analyze divergent representations of queer South African celibacies, and contend they serve as important artistic responses to the colonial legacy of radicalized sexual terror and its extension and transformation into present discourses of corrective/rape. Dr. Selvick turns to Achmat Dangor’s 2001 acclaimed novel Bitter Fruit and Rozena Maart’s debut 2007 novel The Writing Circle as texts that broaden what counts as desire in the face of sexual violence, and offer queer female celibate exchanges as viable options. In Dangor’s Bitter Fruit, the protagonist Lydia heals from her experience of rape by a white apartheid-era police officer through same-sex fantasies. Lydia emotionally withdraws from her marriage following her assault. While her rich interior fantasy life becomes a vehicle to endure and a sensibility that remains undamaged even after the trauma she experiences. In contrast, Maart’s character Amina accepts celibacy as a final response to a series of damaged relationships with abusive men. Amina too withdraws from her marriage and turns instead to female friendships as a source of vitality outside of the paradigm of patriarchal prohibition and heterosexual sex. While Lydia’s queer celibacy is a celebratory response to leaving a history of violence in the past, Amina experiences an ongoing relationship to structures of violence. Still, both Bitter Fruit and The Writing Circle are important contributions to the post-apartheid canon for the way they foreground an expansive way to imagine sexuality and sexual expression amidst violence.