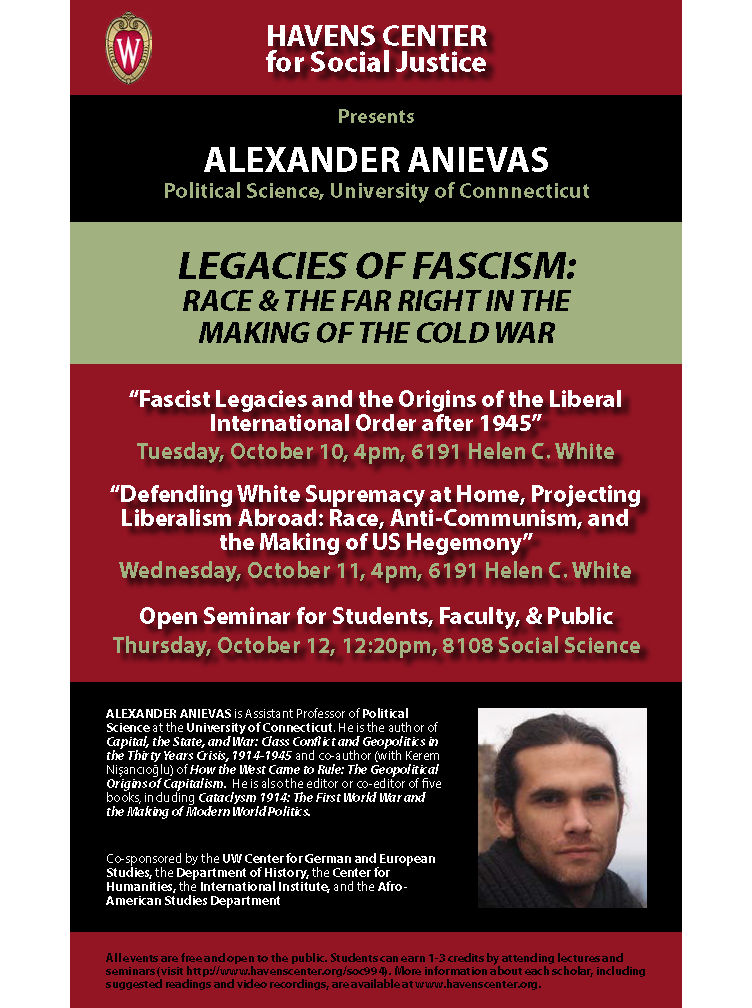 “Legacies of Fascism: Race and the Far-Right in the Making of the Cold War”

Co-sponsored by the UW Center for German & European Studies, the Department of History, the Center for Humanities, the International Institute, and the Afro-American Studies Department.

ALEXANDER ANIEVAS is Assistant Professor of Political Science at the University of Connecticut. Dr. Anievas studies international relations, with a particular focus on the development of non-Eurocentric approaches to international historical sociology and political economy. He has held fellowships at the University of Oxford and University of Cambridge. He is the author of Capital, the State, and War: Class Conflict and Geopolitics in the Thirty Years’ Crisis, 1914-1945 (University of Michigan Press, 2014), for which he was awarded the Sussex International Theory Book Prize, and co-author (with Kerem Nişancıoğlu) of How the West Came to Rule: The Geopolitical Origins of Capitalism (Pluto, 2015). He is also the editor or co-editor of five books, including Historical Sociology and World History: Uneven and Combined Development over the Longue Durée, Cataclysm 1914: The First World and the Making of Modern World Politics, and Marxism and World Politics: Contesting Global Capitalism. He is currently working on a manuscript (with Richard Saull) entitled Legacies of Fascism: Race and the Far-Right in the Making of the Cold War.