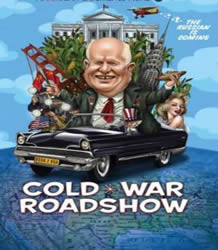 Join us in this 3-part series as we explore Russia and America through film. Each viewing will include a brief introduction and a moderated discussion after the viewing. The second film in the series is Cold War Roadshow (2014), directed by Robert Stone and Tim Toidze.

Before the film there will be an introduction by:

Co-sponsored by the Department of History.