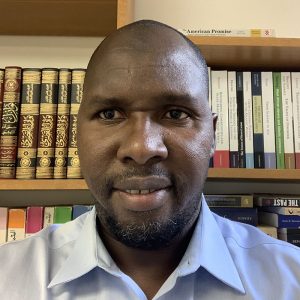 I am a historian of Islam, colonialism, slavery, race, and gender, with a focus on nineteenth- and twentieth-century West Africa. I am currently working on my book manuscript, Emancipation, Authority, and Global Muslim Citizenship: Harāṭīn Reformist Intermediaries in Colonial Mauritania, 1902-1960. This book considers the important religious and civic contributions of Harāṭīn peoples of Mauritania under French colonial rule, a group that has historically been assumed to be oppressed and structurally limited in their abilities to alter their circumstances. It analyzes the Harāṭīn peoples as intentional historical actors who asserted their rights as full Muslim citizens in colonial Mauritania. As a research scholar who is also a member of this community, I reconstruct the biographies of Harāṭīn men and women who went from being oppressed by the local Muslim elites to playing a decisive role in the making of the French colony in Mauritania. They became Muslim authorities, demanding social and religious equality with the Bīẓān or Moors (a mix of Arab and Berber communities who define themselves as “white”) during the colonial period (1902 through 1960). In this book, I offer a new concept of “global Muslim citizenship” to discuss how Harāṭīn intermediaries utilized the opportunities created by the colonial state to display Islamic values typically associated with Saharan intellectual elites and Islamic leadership, aiming to establish full Muslim citizenship for themselves and their wider community. They imagined themselves as part of the ummah (the Muslim global community) by participating in all acts of worship from which they had previously been excluded. They also emancipated enslaved persons, protected runaways, and provided them with jobs, shelters, and education. In so doing, Harāṭīn intermediaries influenced the path toward freedom and global Muslim citizenship. Through a careful analysis of Arabic manuscripts, French colonial documents, interviews, and oral traditions, this study will greatly broaden our understanding of Islam, colonialism, citizenship, religious authority, and emancipation in all post-slavery societies.

Upon completion of my current book manuscript, I plan to work on a second book project, tentatively entitled Mawālī, Craftspeople, and the Making of a Subaltern Muslim Scholarly Community in the Eighteenth- and Nineteenth-Century Sahara. This book unsettles long-standing narratives about Arabic literacy, manuscript culture, archival power, and Islamic knowledge production and preservation in Islamic Africa in the Sahara region (now Mauritania) by bringing due attention to the little-known phenomenon of scholars and scribes among the mawālī (Harāṭīn) and craftspeople (Mʿalīmin) communities. Using a wide range of oral and written accounts, this study explores the significant contributions these groups made to advancing the scholarly traditions of African Muslim societies. Though racial and social structural barriers have contributed to the silencing of these groups, both in the past and the present, this study reveals that non-elite Saharan Muslims participated in various and complex means of spreading Arabic literacy, either by making the tools required for knowledge production and preservation, such as wooden tablets and pens (as was the case for muʿalīmin), or by providing unpaid services for elite families (as was the case for Harāṭīn). My historical fieldwork also verifies that the Mʿalīmin and Harāṭīn were not incidental in the process of knowledge production. Instead, they worked as professional copyists in libraries in fabled towns such as Tishīt, Walāta, and Nema. Historical records also show that a cluster of subaltern Saharan Muslims was well versed in Islamic sciences and Arabic literature. They wrote books on different important subjects related to Arabic grammar, fiqh, and poetry. In so doing, Harāṭīn and Muʿalīmin communities immensely contributed to manuscript culture and produced Islamic knowledge often attributed to the families of knowledge from zawāyā (clerical) groups in Mauritania. This research will de-center Saharan intellectual history by looking beyond zawāyā communities, and thus deepen our understanding of subaltern Muslims’ role in the production and preservation of Islamic manuscript and intellectual heritage.