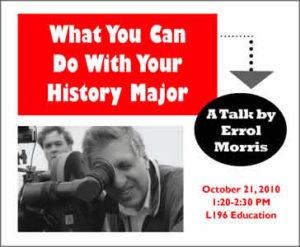 “History as a Crime Scene”

Errol Morris graduated from the University of Wisconsin-Madison in 1969 with a major in History. He will be giving a talk on how his history major has influenced his career as a documentary filmmaker.

Since his debut in 1978, Morris has directed 8 documentary features, and has just finished a 9th. Morris has also directed over 1000 television commercials. In 2000-2001, Morris directed two seasons of the acclaimed television series, First Person. Morris is a regular contributor to the The New York Times website, writing on issues in photography. Morris has received five fellowships from the National Endowment for the Arts, a Guggenheim Fellowship and a MacArthur Fellowship. His work has garnered an Oscar, a Clio, and multiple Emmy nominations. In 2007, he was inducted into the American Academy of Arts

In the course of this interview video, Morris describes what the UW Department of History, and the UW campus was like in the tumultuous period in the late 1960’s when he was on campus. He also speaks at length about his film “The Fog of War” and his relationship with former Defense Secretary Robert Mac Namara, whose career is the main focus of the film. He also discusses how his interest in history has influenced all of his films. Morris suggested what he considered an appropriate title for this interview: “History as a Crime Scene.”