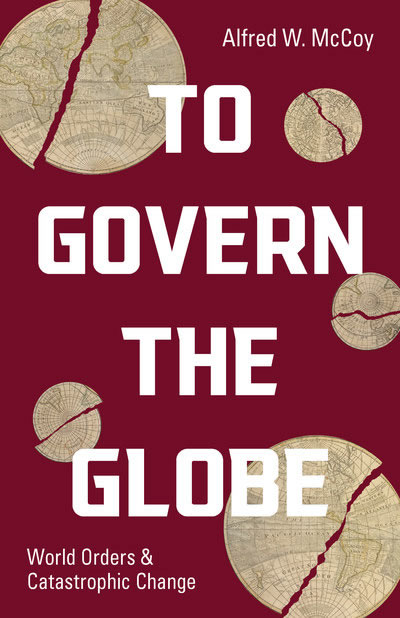 Congratulations to Professor Alfred McCoy on the publication of his new book, To Govern the Globe: World Orders and Catastrophic Change, out this month from Haymarket Books.

“In a tempestuous narrative that sweeps across five continents and seven centuries, this book explains how a succession of catastrophes—from the devastating Black Death of 1350 through the coming climate crisis of 2050—has produced a relentless succession of rising empires and fading world orders.

During the long centuries of Iberian and British imperial rule, the quest for new forms of energy led to the development of the colonial sugar plantation as a uniquely profitable kind of commerce. In a time when issues of race and social justice have arisen with pressing urgency, the book explains how the plantation’s extraordinary profitability relied on a production system that literally worked the slaves to death, creating an insatiable appetite for new captives that made the African slave trade a central feature of modern capitalism for over four centuries.

After surveying past centuries roiled by imperial wars, national revolutions, and the struggle for human rights, the closing chapters use those hard-won insights to peer through the present and into the future.  By rendering often-opaque environmental science in lucid prose, the book explains how climate change and changing world orders will shape the life opportunities for younger generations, born at the start of this century, during the coming decades that will serve as the signposts of their lives—2030, 2050, 2070, and beyond.”

McCoy will discuss To Govern the Globe in conversation with historian Andrew Bacevich during a live Zoom event on Monday, November 22nd, 5:00pm ET. Advance registration is required.