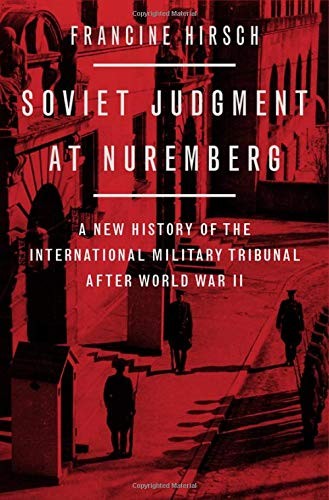 Congratulations to Professor Francine Hirsch, who has received a 2021 Certificate of Merit for a Preeminent Contribution to Creative Scholarship from the American Society of International Law! Professor Hirsch received the Certificate of Merit for her recently published book, Soviet Judgement at Nuremberg: A New History of the International Military Tribunal after World War II (Oxford University Press, 2020).

From the selection committee: “This exceptional book tells the story of Soviet participation in the Nuremberg Trial and Judgment. It is the result of 15 years of effort by the author, providing the reader with a new, important and heretofore missing perspective. Relying heavily on archival Russian-language material, Hirsch chronicles the participation of Soviet jurists (e.g., Aron Trainin) at Nuremberg, noting that Trainin first articulated the concept of a crime against peace, which ultimately served as the conceptual framework for the entire trial. Hirsch’s clear-sighted perspective illuminates two awkward truths – that illiberal authoritarian regimes may sometimes positively shape international law and that international justice is an inherently political process. Rich in detail and beautifully written, the book is essential reading for the historian as well as the lawyer. The concluding chapter describes Soviet participation in early efforts by the United Nations to codify the Nuremberg principles and international human rights law. Despite the cold war rivalries that predominated at the time, the book ends on a hopeful note – although the “real story” of Nuremberg is messier than generally understood, its contribution to a better future is undeniable.”

Read the full announcement of awards see The American Society of International Law.