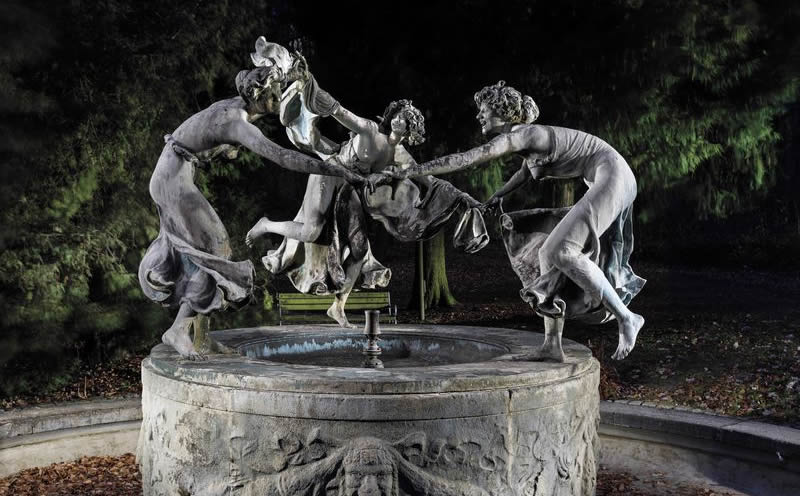 In the final months of the 19th century, a German sculptor named Walter Schott began drawing up plans for a massive work he hoped would represent the pinnacle of his 15-year career. Cast in bronze, the Art Nouveau sculpture would feature three young women prancing around the lip of a stone fountain, fingers intertwined and mouths gleefully thrown open. Drei tanzende Mädchen, he would call it. Three Dancing Maidens.

Schott recruited a few local girls from his Berlin neighborhood, and asked them to dance around a peony bush. The resulting sketches, Schott later wrote in his memoirs, awakened in him an “enthusiasm I could no longer free myself from.” Still, the work came slowly. “To represent three very mobile figures atop a round, narrow disc, so that they make an impression when seen from all sides, has got to be one of the most difficult undertakings,” Schott recalled. He made a model at three-quarters scale, then another, then 35 more.

In early 1901, with his masterwork still in progress, Schott attended a gathering at a famous Berlin art salon. There, he struck up a conversation with a bell-shaped man in a fine black suit. Whether Schott had met Rudolf Mosse previously is unclear, but the artist would have known him by reputation. Born to a Jewish family in rural Posen province, in what is today Poland, Mosse had come to Berlin in the 1860s to work in publishing. By 24, he had his own advertising firm. Now 58, with thinning gray hair and a delta of crinkles between his arced brows, he was one of the wealthiest and most influential men in Germany—the head of a vast business empire that included some 130 newspapers, chief among them the Berliner Tageblatt, the daily of choice for Berlin’s intelligentsia…

Read the full article and view more photos on the Smithonian Magazine’s website.