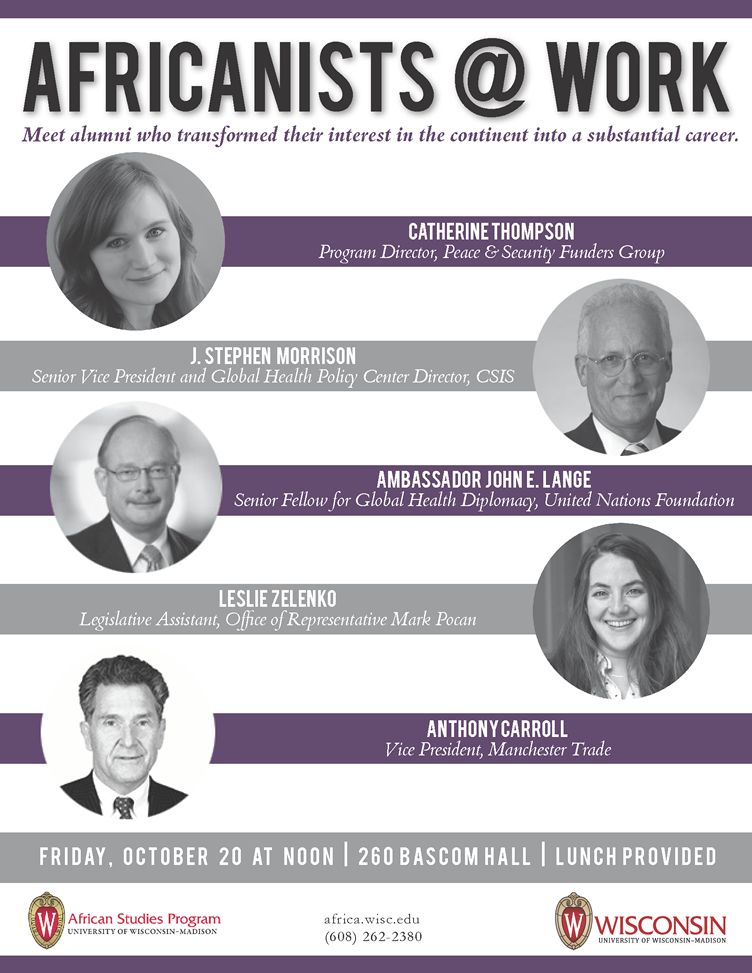 With careers ranging from global health to corporate law to the Foreign Service, these alumni have a wealth of experience to share with students interested in Africa-focused careers.
We would love to have your students join us for this event (there will be pizza!). Could you please spread the word through your website, social media, and/or mailing lists? The bios for each speaker are below.

Catherine Thompson is a Program Director at the Peace and Security Funders Group (PSFG) in Washington, D.C. At PSFG, Cath supports a network of foundations and philanthropists to communicate and collaborate around peace and security issues ranging from women in peace and security to nuclear nonproliferation to cybersecurity to conflict and atrocities prevention, and more. Before joining PSFG, she worked at Independent Sector, supporting a network of over 500 philanthropies and nonprofits through capacity building and programming. Cath founded and still manages PeaceMeals, a program that uses cooking and nutrition education, and dinner parties to promote wellness and community-building after trauma or difficult events. Cath served as a Scoville Fellow at the Truman National Security Project, and as a Fulbright Scholar in Morocco, where she researched transitional justice, reconciliation, and rehabilitation for survivors of human rights abuses. Cath’s research and work in have brought her to North and West Africa, Northern Ireland, and Iraq. Cath holds an M.A. in International Relations from Queens University Belfast, in Northern Ireland, which she attended as a Sen. George Mitchell Scholar. As an undergrad at the University of Wisconsin – Madison, Cath studied abroad for a year in Senegal and graduated with degrees in Peace and Conflict Resolution Studies (individual major), International Relations, Political Science, and a Certificate in African Studies.

Ambassador John E. Lange, Senior Fellow for Global Health Diplomacy at the United Nations Foundation, serves as the Foundation’s primary focal point for global health diplomacy activities and its wide-ranging work with the World Health Organization. Lange worked from 2009-2013 at the Bill & Melinda Gates Foundation, where he engaged in high-level advocacy with international organizations and African governments. In 2012, he was the founding Chair of the Polio Partners Group of the Global Polio Eradication Initiative and served as Co-Chair for four years. Ambassador Lange had a distinguished 28-year career in the Foreign Service at the U.S. Department of State, where he was a pioneer in the field of global health diplomacy. He served as the Special Representative on Avian and Pandemic Influenza; Deputy U.S. Global AIDS Coordinator at the inception of the President’s Emergency Plan for AIDS Relief; and U.S. Ambassador to Botswana (1999-2002), where HIV/AIDS was his signature issue. Lange led the U.S. Embassy in Dar es Salaam, Tanzania, as Chargé d’Affaires during the August 7, 1998, terrorist bombing. Earlier, he had tours of duty in Geneva, Lomé, Paris and Mexico City. Ambassador Lange co-chaired the U.S. Institute of Medicine committee that produced the 2014 report, Investing in Global Health Systems: Sustaining Gains, Transforming Lives. He is the author of a case study on pandemic influenza negotiations, has delivered numerous lectures on issues related to global health diplomacy, and writes a blog on global health in The Huffington Post. He holds a “distinguished graduate” M.S. in national security strategy from the National War College and a J.D. cum laude and a B.A. “with distinction” from the University of Wisconsin-Madison. He speaks English and Spanish fluently and has working proficiency in French.

Leslie Zelenko serves as a legislative assistant to Rep. Mark Pocan (D-WI), a member of the House Appropriations Committee and co-chair of the Congressional Progressive Caucus. She manages the foreign relations, health care, and veterans’ affairs portfolios. Ms. Zelenko is a native of Maryland and she earned a Bachelor of Arts degree in Political Science and Sociology, as well as a certificate in African Studies, from the University of Wisconsin-Madison, with honors in the College of Letters & Science. She is currently pursuing her Master’s Degree in Public Policy from the George Washington University’s Trachtenberg School of Public Policy.

Anthony Carroll has 20 years of experience as a corporate lawyer and business advisor in the areas of international trade and investment, with a particular focus on the countries of sub-Saharan Africa. He possesses an extensive background in intellectual property law, first as an in-house lawyer with a venture capital firm specializing in high tech investment, and more recently as an advisor to the international pharmaceutical industry and sovereign and regional governments on TRIPs and WTO accession. In this later capacity, he presently serves as an advisor to the Government of Jordan’s WTO Accession Office, reviewing legislative reform and the implementation of an IPR Action Plan designed to build awareness and competence within key stakeholders in Jordan.