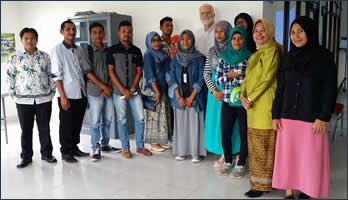 In the last twenty years, language documentation of endangered languages has emerged as a new field of linguistics with contemporary priorities and procedures. Significant funding from diverse sources, including the Volkswagen Stiftung, the Arcadia Fund and the Documenting Endangered Languages Programme, has yielded accessible, archived materials of high quality. Very often these language documentation projects and programs are linked to aspirations of language revitalization. Recently, however, some consideration has been given to the strength of that link. As Peter Austin (2016), one of the leading scholars engaged in language documentation, somewhat indirectly pointed out:

“…there are opportunities for language documentation to adopt a more socially-engaged approach to languages to and linguistic research, including better engagement with language revitalisation.”

Beginning in 2015, Malaysian and Indonesian fieldworkers, in collaboration with a few experienced foreign scholars, have launched two projects focused specifically on language revitalization. The first project, Language networks and variation of the Bandanese (Eastern Indonesia), was funded by the Kone Foundation of Finland, under the direction of Prof. Timo Kaartinen (Helsinki University). The second project, Attitudes Towards Language Choice and Ethnicity: Multigenerational Divergence and Rapprochement, was funded by the Toyota Foundation of Japan under the direction of Dr Chong Shin (Universiti Kebangsaan Malaysia)

These projects may represent a paradigm shift or, at least, a reshuffle of priorities. By putting language revitalization first with documentation as a spin-off, new procedures and new products are being tested. Perhaps this reshuffle will contribute to the empowerment of local communities to revitalize their own languages.