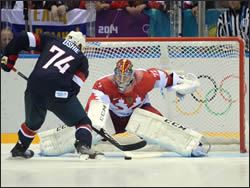 “Sport and the Cold War: Conflict without Weapons” will examine the ways in which such occasions as the Olympic Games became symbolic arenas for confrontation between the United States and the Soviet Union or, in many cases, between “west” and “east” in the decades from 1952 until the decline of the Soviet state in the late 1980s. The lecture will reflect on the features of modern societies and competing political systems combined to lend such meaning and intensity to sporting events.

Sponsored by the Center for European Studies and Department of History.