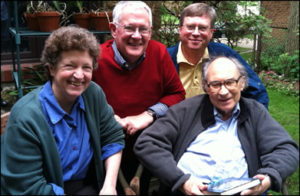 On June 24th, 2011, three alumni of the University of Wisconsin-Madison History Department, Catherine Lynch (PhD 1989), Robert B. Marks (PhD 1978), and Paul G. Pickowicz (PhD 1973), gathered at the Madison home of Maurice Meisner, Harvey Goldberg Professor Emeritus of History, to present him with a copy of their newly published book, Radicalism, Revolution, and Reform in Modern China: Essays in Honor of Maurice Meisner (Lanham, MD: Lexington Books, 2011). Representing a spectrum of current scholarship, the essays in this volume investigate China’s twentieth-century past and its present with a view toward better understanding the ideas and ideals of people who dared to imagine radical transformation of their worlds and assessing the limitations of these visions and their implementations.

The book had its beginning two years earlier in the papers of a conference, “June 4, the Twentieth Anniversary: Reflections on History and Contemporary Change in China Before and After Tiananmen – A Conference in Honor of Maurice Meisner,” held from June 4 to 7 in 2009 at UW’s Pyle Center. There former students of Mauri Meisner met to share their work in celebration of Meisner’s fifty years of pioneering scholarship as a tribute to their beloved teacher. UW History alumni participating in the conference, and later in the creation of the book, included Tina Mai Chen, Steven C. Davidson, Lee Feigon, Sooyoung Kim, Thomas D. Lutze, and Shu-chin Wu, as well as the book’s editors, Lynch, Marks, and Pickowicz.

In addition to outside support, the conference and book were possible due to grants and support from UW’s Goldberg Center, Anonymous Fund, Center for East Asian Studies, and History Department.