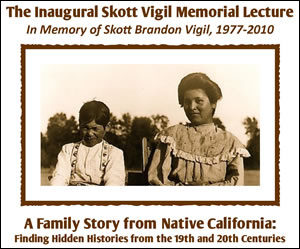 “A Family Story from Native California: Finding Hidden Histories from the 19th and 20th Centuries”

Author of We Were All Like Migrant Workers Here: Work, Community, and Memory on California’s Round Valley Reservation, 1850-1941 (University of North Carolina Press, 2009).

In American Indian history, the era between federal allotment in 1887 and the onset of termination policy in 1953 has been described as “the abyss.” Before the late nineteenth century, Native peoples exercised power in the American West, but they descended into this chasm as a consequence of the brutal Indian Wars, their incarceration on reservations, and the diminishment of their tribal sovereignty. At the same time, Native peoples adapted their economies to new circumstances, adopted new family and kinship practices, and created new political opportunities. Using the history of the Wright family on California’s Round Valley Reservation, this presentation examines one family’s ability to exercise power and vitality in an era where Native peoples saw their ways of life undercut by the United States. The collective survival and activities of the Wrights serve as a bridge over what historians have seen as the abyss of the nineteenth century, a bridge that leads toward the revival of Native peoples and nations in the twentieth.