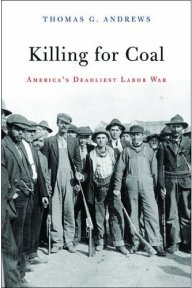 Thomas G. Andrews has been named one of three recipients of the 2009 Bancroft Prize for his book Killing for Coal: America’s Deadliest Labor War (Cambridge: Harvard University Press), a study of the 1914 massacre of striking coal miners in Colorado.

One of the most coveted honors in the field of history, the Bancroft is awarded annually by the trustees of Columbia University to the authors of books of exceptional merit in the fields of American history, biography and diplomacy.

Andrews is assistant professor of history at the University of Colorado, Denver. He earned his Ph.D. from UW-Madison in U.S. History in May 2003. His book is based on his dissertation, “The Road to Ludlow: Work, Environment, and Industrialization in Southern California, 1870-1915.” While at UW-Madison, he worked with Professors William J. Cronon, Jeanne Boydston, Charles L. Cohen, Arthur McEvoy, William J. Reese, Brenda Gayle Plummer, Colleen Dunlavy, and John M. Cooper, Jr.

Fellow recipients of the Bancroft Prize for 2009 are Drew Gilpin Faust, author of This Republic of Suffering: Death and the American Civil War, and Pekka Hämäläinen, author of The Comanche Empire.

The Bancroft Prizes were established at Columbia is 1948 with a bequest from Frederic Bancroft, the historian, author and librarian of the Department of State, to provide steady development of library resources, to support instruction and research in American history and diplomacy and to recognize exceptional books in the field. To view a list of previous winners, go to: http://library.columbia.edu/about/awards/bancroft/previous_awards.html.

In addition: There’s a 2:44 movie on YouTube of Dr. Andrews talking about his book at called “Killing for Coal: Thomas G. Andrews.”