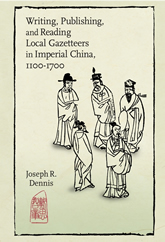 This book is the definitive study of imperial Chinese local gazetteers, one of the most important sources for premodern Chinese studies. Methodologically innovative, it represents a major contribution to the history of books, publishing, reading, and society.

By examining how gazetteers were read, Joseph R. Dennis illustrates their significance in local societies and national discourses. His analysis of how gazetteers were initiated and produced reconceptualizes the geography of imperial Chinese publishing. Whereas previous studies argued that publishing, and thus cultural and intellectual power, were concentrated in the southeast, Dennis shows that publishing and book ownership were widely dispersed throughout China and books were found even in isolated locales. Adding a dynamic element to our earlier understanding of the publishing industry, Dennis tracks the movements of manuscripts to printers and print labor to production sites. By reconstructing printer business zones, he demonstrates that publishers operated across long distances in trans-regional markets. He also creates the first substantial data set on publishing costs in early modern China—a foundational breakthrough in understanding the world of Chinese books. Dennis’s work reveals areas for future research on newly-identified regional publishing centers and the economics of book production.