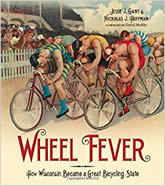 On rails-to-trails bike paths, city streets, and winding country roads, the bicycle seems ubiquitous in the Badger State. Yet there’s a complex and fascinating history behind the popularity of biking in Wisconsin–one that until now has never been told in depth.

Meticulously researched through periodicals and newspapers, Wheel Fever traces the story of Wisconsin’s first “bicycling boom,” from the velocipede craze of 1869 through the “wheel fever” of the 1890s. From the start it has been defined by a rich and often impassioned debate over who should be allowed to ride, where they could ride, and even what they could wear. Many early riders embraced the bicycle as a solution to the age-old problem of how to get from here to there quickly and easily. Yet for every supporter of the “poor man”s horse, there were others who wanted to keep the rights and privileges of riding to an elite set. Women, the working class, and people of color were often left behind as middle- and upper-class white men benefited from the “masculine” sport and all-male clubs and racing events began to shape the scene. Even as bikes became more affordable and accessible, a culture defined by inequality
helped create bicycling in its own image.

“Wheel Fever” is about the origins of bicycling in Wisconsin and why those origins still matter, but it is also about our continuing fascination with all things bicycle. From “boneshakers” to highwheels, standard models to racing bikes, tandems to tricycles, the book is lushly illustrated with never-before-seen images of early cycling and the people who rode them: bloomer girls, bicycle jockeys, young urbanites, and unionized workers. Laying the foundations for a much-beloved sport, “Wheel Fever” challenges us to imagine anew the democratic possibilities that animated cycling’s early debates.