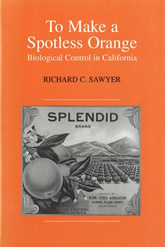 In 1889, California orange growers faced a devastating attack of cottony-cushion scale. In response, scientists from the U.S. Department of Agriculture (USDA) imported the Australian vedalia beetle, which preyed on the insect that caused the scale. In less than a year the vedalia beetle eliminated the pest, and a standard for biological control was established. The predation of pests by other insects is but one component of Richard Sawyer’s To Make a Spotless Orange. The focus of the work is biological pest control in the California citrus industry, and through this discussion other themes emerge. The creation of consumer demand for California oranges, the maturation of the science of entomology, and the technology of biological control contribute to the story of managing agricultural pests in the citrus industry. Sawyer begins by assessing the emergence of the California citrus industry. According to Sawyer, this group of producers is uniquely inclined to accept nontraditional production methods, such as biological control. The success of the vedalia beetle increased their expectations for additional triumphs. Entomologists from the federal government and the state of California tempered the enthusiasm of producers and fellow scientists to prevent the accidental introduction of harmful insects. The need to produce a spotless orange is a model of producers’ creating a demand for a product. A bright, shiny orange free of blemishes appealed visually to the consumer, but citrus growers wished to increase the demand for their product by other means. Sawyer cites the 1908 “Oranges for Health, California for Wealth” campaign in Iowa as an example of cooperation between the California Fruit Growers Exchange (renamed Sunkist Growers in 1952) and the Southern Pacific Railroad to encourage citrus consumption and emigration to California (p. 33). The consumption of oranges by Iowans increased 50 percent that year, and many Midwesterners did relocate to the West. Citrus growers believed in the gospel of the spotless orange, and growers employed chemical and biological means to receive the premium price for blemish-free fruit. Anyone who challenged the high cosmetic standards for the oranges was denounced. Sawyer emphasizes the importance of the individual in establishing a credible biological control program in California through his analysis of the role of Harry Smith, the first director of the California Department of Biological Control in Riverside. Smith cultivated and received the respect of the USDA administrators, local officials, and producers. After he retired in [End Page 801] 1951, succeeding administrators could not maintain the consensus he had established. Academic politics weakened the department, and factions at Berkeley and Riverside oversaw the dissolution of the only state department of biological control. To Make a Spotless Orange is organized chronologically, and the narrative is easily followed. Sawyer succinctly describes the shifting definition of biological control and the ongoing successes and failures of the work. Entomologists first restricted biological control to only the introduction of insects to combat pests. By the 1940s, however, biological control expanded to combating weeds. The later introduction of sterile pests is recognized as another means of biological control. Sawyer also considers the tension and cooperation between federal, state, and local agencies as well as the dynamic between private and university interests. He addresses American cultural history, such as the social climate after World War II, and the reaction to the intensified use of chemical applications following the 1962 publication of Rachel Carson’s Silent Spring. An extended treatment of Carson’s book would have enhanced this book. Sawyer argues that California agricultural scientists dedicated themselves to their perceived constituents, the citrus growers. This assertion requires additional development. Conversely, as entomologists investigated biological control, they found that producers selected cheaper and more effective chemical applications. Agricultural scientists sometimes neglected the effect of chemicals on public health, which led to criticism that the researchers served as agents of agribusiness. Sawyer contends that biological control developed through the support of agribusiness, and that the story is more complex than a morality tale against intensive fruit production. The work concludes with a reassessment of biological control and its relationship to agriculture. Though advocates for biological control continue to argue for its use, research universities look toward pure science rather than applications. The “juncture of pure and applied science” employed by agricultural scientists is no longer in balance, and many institutions no longer value the pure science outcomes discovered through applied science (p. 67). Sawyer’s work is a valuable contribution to the history of American technology and agriculture in the twentieth century, and it serves as a useful argument for applied science