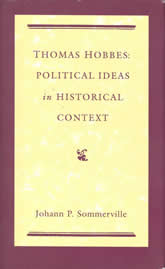 Thomas Hobbes was the greatest British political theorist. His Leviathan is a major classic of political philosophy.

Since the Second World War there has been a dramatic growth of interest in Hobbes’ theories, largely because his ideas are of central relevance to modern political problems. Hobbes had much to say that bears directly on the questions of rights of the individuals and minorities, the limits of state power, the legitimacy of civil disobedience, and the nature of international relations. By rigorous argument from the first principles, he tried to show that human survival necessities absolute state power but that rules should not use their power to suppress unorthodox opinions.

Too often commentators on Hobbes have failed to grasp his meaning because they have ignored the historical context in which he wrote. Drawing on much recent scholarship and many little-known seventeenth-century sources, Dr. Sommerville sets Hobbes’s teachings on the ‘state of nature’, the origins of government, the powers of rulers, the nature of the family, and other key issues against a backcloth of contemporary discussions. Indeed, Sommerville argues that a great deal of what Hobbes had to say cannot properly be understood unless it is seen in the context of seventeenth-century political and religious debates – debates which helped to bring civil war to England in the 1640s, and which fuelled warfare on the European continent for much of the seventeenth century.

Adopting an innovative approach to political theory, this book will become a classic text for the Hobbes student. Dr. Sommerville’s clear and readable analysis also takes full account of the often neglected second half of Leviathan, which deals with religious questions. Here, Hobbes’ ideas on religion and church-state relations are thoroughly examined, and are shown to be an integral part of his overall theory.