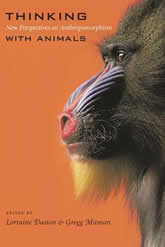 Is anthropomorphism a scientific sin? Scientists and animal researchers routinely warn against “animal stories,” and contrast rigorous explanations and observation to facile and even fanciful projections about animals. Yet many of us, scientists and researchers included, continue to see animals as humans and humans as animals. As this innovative new collection demonstrates, humans use animals to transcend the confines of self and species; they also enlist them to symbolize, dramatize, and illuminate aspects of humans’ experience and fantasy. Humans merge with animals in stories, films, philosophical speculations, and scientific treatises. In their performance with humans on many stages and in different ways, animals move us to think.

From Victorian vivisectionists to elephant conservation, from ancient Indian mythology to pet ownership in the contemporary United States, our understanding of both animals and what it means to be human has been shaped by anthropomorphic thinking. The contributors to Thinking with Animals explore the how and why of anthropomorphism, drawing attention to its rich and varied uses. Prominent scholars in the fields of anthropology, ethology, history, and philosophy, as well as filmmakers and photographers, take a closer look at how deeply and broadly ways of imagining animals have transformed humans and animals alike.

Essays in the book investigate the changing patterns of anthropomorphism across different time periods and settings, as well as their transformative effects, both figuratively and literally, upon animals, humans, and their interactions. Examining how anthropomorphic thinking “works” in a range of different contexts, contributors reveal the ways in which anthropomorphism turns out to be remarkably useful: it can promote good health and spirits, enlist support in political causes, sell products across boundaries of culture of and nationality, crystallize and strengthen social values, and hold up a philosophical mirror to the human predicament.