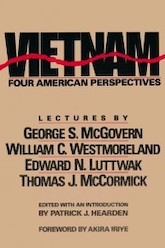 This collection of speeches delivered in 1987 presents the widely diverging opinions of four men: an eminent politician, a professional soldier, a government consultant, and a distinguished scholar. The first contributor, Senator George S. McGovern, ran as the Democratic candidate for president in 1972 on a platform that called for the withdrawal of American troops from Vietnam. The second speaker, General William C. Westmoreland, commanded American military forces in Vietnam until growing battlefield casualties and economic costs undermined support for the strategy of attrition in the United States. The third essay is by Edward N. Luttwak, a strong advocate for military reform in the United States and a frequent participant in high-level government discussions about American strategic interests throughout the world. The fourth speaker Thomas J. McCormack, is a diplomatic historian at the University of Wisconsin and an astute critic of American foreign policy. Each lecture is followed by a lively question-and-answer session that highlights the key points of agreement and disagreement with respect to the fundamental issues raised in the lectures. In a stimulating foreword, Akira Iriye challenges readers to think about the Vietnam War in relationship to the current debate about the role that the United States should play in world affairs.