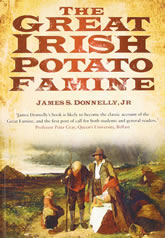 The great Irish potato famine of the late 1840s and early 1850s was a massive social catastrophe which resulted in the death of about one million people – a scale of mortality which, taking into account the scale of Ireland’s population in 1845, places this disaster among the worst in modern world history. The famine was also largely responsible, in conjunction with British government politics, for one of the great international human migrations in modern history – the mass exodus of some two million people from Ireland, mostly to North America, in the years 1845-55.