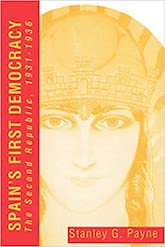 The significance of Spain’s Second Republic has been largely overshadowed by the cataclysmic Civil War that immediately followed it. Stanley Payne brings his immense knowledge of Spanish history to bear on the five-year span of the Second Republic as a historic entity in its own right. In Spain’s First Democracy, he argues that the Republic was one of the major national attempts at political democratization and reform in Europe between the World Wars and represented the most important effort to swim against the tide during Europe’s “era of fascism.”

Payne’s detailed study places the Republic within the historical framework of Spanish liberalism and the rapid modernization of interwar Europe, which was unlike any other period in Spain’s history. Payne discusses the Republicans’ efforts to establish Spain’s first democratic political systems and to institute major reforms within the Republic. In highlighting reforms in politics and government, church-state relations, education and culture, public works, military affairs, and society as a whole, he assesses the successes and failures of these reforms as well as the reasons for their limitations. He also examines the economic and foreign policy issues of the period.

Focusing particularly on political conflict and social cleavage, Payne brilliantly explores the sources and character of the political polarization that developed as a result of the assaults on the Republic from the Left and the Right. He identifies the main political actors in this schism and their role in the eventual breakdown of the Republic. Tracing the progressive collapse of the Republican polity in the first half of 1936, Payne stresses the importance of political violence in the democracy’s downfall.

In restoring perspectives that have been ignored or bypassed, Payne presents a consistent and detailed interpretation of Spain’s Second Republic, demonstrating its striking parallels to the Weimar Republic in Germany.