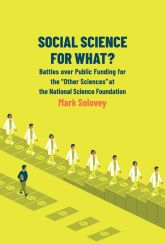 Mark Solovey. Social Science for What? Battles Over Public Funding for the “Other Sciences” At the National Science Foundation. MIT Press, 2020.

In the early Cold War years, the U.S. government established the National Science Foundation (NSF), a civilian agency that soon became widely known for its dedication to supporting first-rate science. The agency’s 1950 enabling legislation made no mention of the social sciences, although it included a vague reference to “other sciences.” Nevertheless, as Mark Solovey shows in this book, the NSF also soon became a major—albeit controversial—source of public funding for them.

Solovey’s analysis underscores the long-term impact of early developments, when the NSF embraced a “scientistic” strategy wherein the natural sciences represented the gold standard, and created a social science program limited to “hard-core” studies. Along the way, Solovey shows how the NSF’s efforts to support scholarship, advanced training, and educational programs were shaped by landmark scientific and political developments, including McCarthyism, Sputnik, reform liberalism during the 1960s, and a newly energized conservative movement during the 1970s and 1980s. Finally, he assesses the NSF’s relevance in a “post-truth” era, questions the legacy of its scientistic strategy, and calls for a separate social science agency—a National Social Science Foundation.

Solovey’s study of the battles over public funding is crucial for understanding the recent history of the social sciences as well as ongoing debates over their scientific status and social value.

The open access edition of this book was made possible by generous funding from the MIT Libraries.