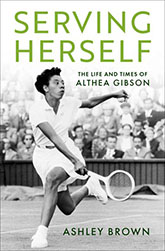 A compelling narrative of the trials and triumphs of tennis champion Althea Gibson, a key figure in the integration of American sports and, for a time, one of the most famous women in the world.

From her start playing paddle tennis on the streets of Harlem as a young teenager to her eleven Grand Slam tennis wins to her professional golf career, Althea Gibson became the most famous black sportswoman of the mid-twentieth century. In her unprecedented athletic career, she was the first African American to win titles at the French Open, Wimbledon, and the US Open.

In this comprehensive biography, Ashley Brown narrates the public career and private struggles of Althea Gibson (1927-2003). Based on extensive archival work and oral histories, Serving Herself sets Gibson’s life and choices against the backdrop of the Great Migration, Jim Crow racism, the integration of American sports, the civil rights movement, the Cold War, and second wave feminism. Throughout her life Gibson continuously negotiated the expectations of her supporters and adversaries, including her patrons in the black-led American Tennis Association, the white-led United States Lawn Tennis Association, and the media, particularly the Black press and community’s expectations that she selflessly serve as a representative of her race. An incredibly talented, ultra-competitive, and not always likeable athlete, Gibson wanted to be treated as an individual first and foremost, not as a member of a specific race or gender. She was reluctant to speak openly about the indignities and prejudices she navigated as an African American woman, though she faced numerous institutional and societal barriers in achieving her goals. She frequently bucked conventional norms of femininity and put her career ahead of romantic relationships, making her personal life the subject of constant scrutiny and rumors. Despite her major wins and international recognition, including a ticker tape parade in New York City and the covers of Sports Illustrated and Time, Gibson endeavored to find commercial sponsorship and permanent economic stability. Committed to self-sufficiency, she pivoted from the elite amateur tennis circuit to State Department-sponsored goodwill tours, attempts to find success as a singer and Hollywood actress, the professional golf circuit, a tour with the Harlem Globetrotters and her own professional tennis tour, coaching, teaching children at tennis clinics, and a stint as New Jersey Athletics Commissioner. As she struggled to support herself in old age, she was left with disappointment, recounting her past achievements decades before female tennis players were able to garner substantial earnings.

A compelling life and times portrait, Serving Herself offers a revealing look at the rise and fall of a fiercely independent trailblazer who satisfied her own needs and simultaneously set a pathbreaking course for Black athletes.