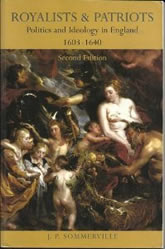 The early Stuart age was critical to England’s political and constitutional development, and has been the subject of passionate debate among historians. Some argue that the Civil War had few long-term origins; others discern deeper roots. But how did the men and women of the time see contemporary politics? What were the issues and the principles that mattered to them? And how did this ideological dimension contribute to the turbulent years before 1640?

Strangely neglected amidst all the cut-and-thrust of modern historiographical controversy, this is the territory that Johann Sommerville explored in his widely-respected study (first published in 1986 as Politics and Ideology in England 1603-1640), which now appears in this major Second Edition. The result is not only an important contribution for historians; it also throws a vivid light on the political climate and preoccupation of Shakespeare and his contemporaries.

As before, the first part offers a notably clear account of the main political theories current at the time, each located and discussed within its wider historical contexts. These include the Divine Right of Knights, the theory of the ancient constitution, and the idea that government is founded upon the consent of the governed. But political thought is rarely isolated from political practice: ideas have to come to terms with events, and theories are developed to justify concrete positions. In the seconded part, therefore, Johann Sommerville goes on to examine how these major theories were applied in practice to the burning issues of the day.

To these ends, he analyses a large body of early seventeenth-century political literature – setting the work of famous theorists like Hobbes, Locke and Hooker against the backcloth of more humble writers, to clarify what was original in their work and what was the common currency of the age. He is then able to unravel the ideas and attitudes that contemporaries brought to such key topics as taxation without consent, the powers of arbitrary arrest, and the government of the Church.

He shows how differences in political outlook influenced political practice and fueled the mutual distrust between the king and many of his powerful subjects. Civil War was not inevitable in England; but by dissecting the neglected ideological dimension of politics, Johann Sommerville reveals a major cause of the eventual breakdown of the peace.

The Second Edition has been revised throughout to take account of recent research, and it contains an extensive new section reviewing the current state of historiographical debate. The suggestions for Further Reading have been updated; there is a useful new Chronology; and the entire text has been reset in a more readable format.