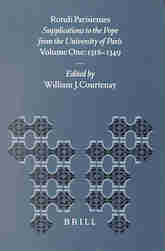 Series: Education and Society in the Middle Ages and Renaissance, Volume: 44

This volume continues the edition of the rotuli, or lists of benefice supplications, sent to the papacy by masters, bachelors, and students at the University of Paris in the fourteenth century. It specifically covers the pontificate of the Avignon pope Clement VII (1378-1394). It also contains letters of provision, in abbreviated form, that resulted from those petitions, along with a large number of supplications from individual Parisian scholars either submitted independently or, more frequently, through another sponsor. In contrast to earlier papal beneficial policy, Pope Clement responded favorably to many petitions from students in the faculty of arts at Paris, some of them in the beginning years of their undergraduate education. Thus, in addition to providing important information on Parisian scholars and papal beneficial policy in the early years of the Papal Schism, it documents a portion of the university community otherwise invisible, namely undergraduate students, and reveals the connections between Parisian scholars and social and ecclesiastical patrons at the end of the fourteenth century. The book concludes with an index of the names of scholars and patrons as well as a place-name index locating the parish and collegiate churches mentioned in the texts. Along with the two earlier volumes, this edition represents the largest body of new documentation for the pre-fifteenth century University to appear since the publication of the Chartularium Universitatis Parisiensis at the end of the nineteenth century.
Read more