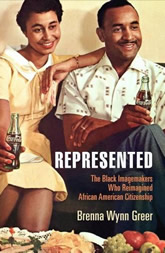 In 1948, Moss Kendrix, a former New Deal public relations officer, founded a highly successful, Washington, D.C.-based public relations firm, the flagship client of which was the Coca-Cola Company. As the first black pitchman for Coca-Cola, Kendrix found his way into the rarefied world of white corporate America. His personal phone book also included the names of countless black celebrities, such as bandleader Duke Ellington, singer-actress Pearl Bailey, and boxer Joe Louis, with whom he had built relationships in the course of developing marketing campaigns for his numerous federal and corporate clients. Kendrix, along with Ebony publisher John H. Johnson and Life photographer Gordon Parks, recognized that, in the image-saturated world of postwar America, media in all its forms held greater significance for defining American citizenship than ever before. For these imagemakers, the visual representation of African Americans as good citizens was good business.

In Represented, Brenna Wynn Greer explores how black entrepreneurs produced magazines, photographs, and advertising that forged a close association between blackness and Americanness. In particular, they popularized conceptions of African Americans as enthusiastic consumers, a status essential to postwar citizenship claims. But their media creations were complicated: subject to marketplace dictates, they often relied on gender, class, and family stereotypes. Demand for such representations came not only from corporate and government clients to fuel mass consumerism and attract support for national efforts, such as the fight against fascism, but also from African Americans who sought depictions of blackness to counter racist ideas that undermined their rights and their national belonging as citizens.

The story of how black capitalists made the market work for racial progress on their way to making money reminds us that the path to civil rights involved commercial endeavors as well as social and political activism.