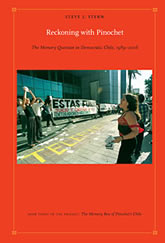 Reckoning with Pinochet is the first comprehensive account of how Chile came to terms with General Augusto Pinochet’s legacy of human rights atrocities. An icon among Latin America’s “dirty war” dictators, Pinochet had ruled with extreme violence while building a loyal social base. Hero to some and criminal to others, the general cast a long shadow over Chile’s future. Steve J. Stern recounts the full history of Chile’s democratic reckoning, from the negotiations in 1989 to chart a post-dictatorship transition; through Pinochet’s arrest in London in 1998; the thirtieth anniversary, in 2003, of the coup that overthrew President Salvador Allende; and Pinochet’s death in 2006. He shows how transnational events and networks shaped Chile’s battles over memory, and how the Chilean case contributed to shifts in the world culture of human rights.

Stern’s analysis integrates policymaking by elites, grassroots efforts by human rights victims and activists, and inside accounts of the truth commissions and courts where top-down and bottom-up initiatives met. Interpreting solemn presidential speeches, raucous street protests, interviews, journalism, humor, cinema, and other sources, he describes the slow, imperfect, but surprisingly forceful advance of efforts to revive democratic values through public memory struggles, despite the power still wielded by the military and a conservative social base including the investor class. Over time, resourceful civil-society activists and select state actors won hard-fought, if limited, gains. As a result, Chileans were able to face the unwelcome past more honestly, launch the world’s first truth commission to examine torture, ensnare high-level perpetrators in the web of criminal justice, and build a public culture of human rights. Stern provides an important conceptualization of collective memory in the wake of national trauma in this magisterial work of history.