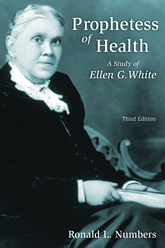 Respected historian of science Ronald Numbers here examines one of the most influential, yet least examined, religious leaders in American history — Ellen G. White, the enigmatic visionary who founded the Seventh-day Adventist Church. Numbers scrutinizes White’s life (1827–1915), from her teenage visions and testimonies to her extensive advice on health reform, which influenced the direction of the church she founded. This third edition features a new preface and two key documents that shed further light on White — transcripts of the trial of Elder Israel Dammon in 1845 and the proceedings of the secret Bible Conferences in 1919.