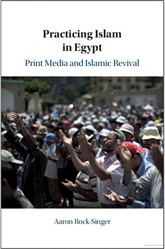 Following the ideological disappointment of the 1967 Arab-Israeli War, an Islamic revival arose in Egypt. Yet, far from a mechanical reaction to the decline of secular nationalism, this religious shift was the product of impassioned competition among Muslim Brothers, Salafis and state institutions and their varied efforts to mobilize Egyptians to their respective projects. By pulling together the linked stories of these diverse claimants to religious authority and tracing the social and intellectual history of everyday practices of piety, Aaron Rock-Singer shows how Islamic activists and institutions across the political spectrum reshaped daily practices in an effort to persuade followers to adopt novel models of religiosity. In so doing, he reveals how Egypt’s Islamic revival emerged, who it involved, and why it continues to shape Egypt today.