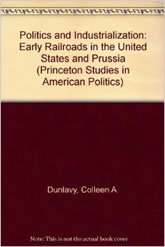 How do national political institutions influence the process of industrial change? This comparative study of the birth of American and Prussian railroads offers historical insights into this critical, but seldom studied, question. Analyzing developments in the 1830s and 1840s, Colleen Dunlavy shows how two very different political structures affected the dynamics of railroad policy making, the organization of railroad interests, and the process of technological choice.

Dunlavy examines the rich political context of a seeming paradox: authoritarian, centralized Prussia adopted a largely hands-off policy toward the railroads, but the more liberal, fragmented American government sought vigorously both to promote and to regulate the new industry. By also fragmenting interests and technological choices, the American structure impeded the emergence of the railroad as a system, while the centralized Prussian structure facilitated it. The book concludes by describing how the railroads themselves precipitated a transformation of both political structures by the 1850s. A keener sensitivity to the impact of political structures, Dunlavy shows, enriches our understanding of the complex interplay between industrial and political change, past and present.