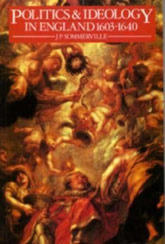 The years before the Civil War were a critical period in England’s political and constitutional development, and have been the subject of vigorous debate. Some historians argue that the Civil War had few long-term origins, while others discern deeper roots. Dr Sommerville here looks at the contemporary view of politics and at the ideologies, both in theory and in action, which contributed to the turbulent years before 1640.