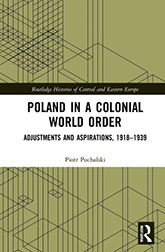 Poland in a Colonial World Order is a study of the interwar Polish state and empire building project in a changing world of empires, nation-states, dominions, protectorates, mandates, and colonies.

Drawing from a wide range of sources spanning two continents and five countries, Piotr Puchalski examines how Polish elites looked to expansion in South America and Africa as a solution to both real problems, such as industrial backwardness, and perceived issues, such as the supposed overrepresentation of Jews in “liberal professions.” He charts how, in partnership with other European powers and international institutions such as the League of Nations, Polish leaders made attempts to channel emigration to South America, to establish direct trade with Africa, to expedite national minorities to far-away places, and to tap into colonial resources around the globe. Puchalski demonstrates the intersection between such national policies and larger processes taking place at the time, including the internationalist turn of colonialism and the global fascination with technocratic solutions.

Carefully researched, the volume is key reading for scholars and advanced students of twentieth-century European history.