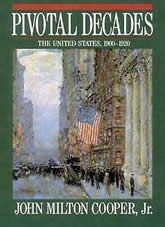 Contemporary American began in the first two decades of this century.

These were the years in which two of our greatest presidents—Theodore Roosevelt and Woodrow Wilson—transformed the office into the center of power; in which the United States entered the world stage and fought its first overseas war; in which the government’s proper role in the economy became a public question; and in which reform became an imperative for muckraking reporters, progressive politicians, social activists, and writers.

It was a golden age in American politics, when fundamental ideas were given compelling expression by thoughtful candidates. It was a trying time, however, for many Americans, including women who fought for the vote, blacks who began organizing to secure their rights, and activists on the Left who lost theirs in the first Red Scare of the century.

John Cooper’s panoramic history of this period shows us where we came from and sheds light on where we are.