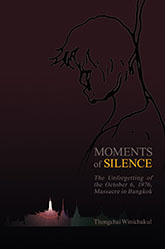 Thongchai Winichakul. Moments of Silence: The Unforgetting of the October 6, 1976, Massacre in Bangkok. University of Hawaii Press, 2020.

The massacre on October 6, 1976, in Bangkok was brutal and violent, its savagery unprecedented in modern Thai history. Four decades later there has been no investigation into the atrocity; information remains limited, the truth unknown. There has been no collective coming to terms with what happened or who is responsible. Thai society still refuses to confront this dark page in its history.Moments of Silence focuses on the silence that surrounds the October 6 massacre. Silence, the book argues, is not forgetting. Rather it signals an inability to forget or remember—or to articulate a socially meaningful memory. It is the “unforgetting,” the liminal domain between remembering and forgetting. Historian Thongchai Winichakul, a participant in the events of that day, gives the silence both a voice and a history by highlighting the factors that contributed to the unforgetting amidst changing memories of the massacre over the decades that followed. They include shifting political conditions and context, the influence of Buddhism, the royal-nationalist narrative of history, the role played by the monarchy as moral authority and arbiter of justice, and a widespread perception that the truth might have devastating ramifications for Thai society. The unforgetting impacted both victims and perpetrators in different ways. It produced a collective false memory of an incident that never took place, but it also produced silence that is filled with hope and counter-history.

Moments of Silence tells the story of a tragedy in Thailand—its victims and survivors—and how Thai people coped when closure was unavailable in the wake of atrocity. But it also illuminates the unforgetting as a phenomenon common to other times and places where authoritarian governments flourish, where atrocities go unexamined, and where censorship (imposed or self-directed) limits public discourse. The tensions inherent in the author’s dual role offer a riveting story, as well as a rare and intriguing perspective. Most of all, this provocative book makes clear the need to provide a place for past wrongs in the public memory.