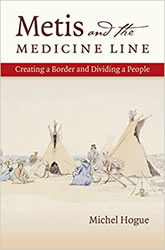 Michael Hogue. Metis and the Medicine Line: Creating a Boarder and Dividing a People. The University of North Carolina Press, 2015.

Born of encounters between Indigenous women and Euro-American men in the first decades of the nineteenth century, the Plains Metis people occupied contentious geographic and cultural spaces. Living in a disputed area of the northern Plains inhabited by various Indigenous nations and claimed by both the United States and Great Britain, the Metis emerged as a people with distinctive styles of speech, dress, and religious practice, and occupational identities forged in the intense rivalries of the fur and provisions trade. Michel Hogue explores how, as fur trade societies waned and as state officials looked to establish clear lines separating the United States from Canada and Indians from non-Indians, these communities of mixed Indigenous and European ancestry were profoundly affected by the efforts of nation-states to divide and absorb the North American West.

Grounded in extensive research in U.S. and Canadian archives, Hogue’s account recenters historical discussions that have typically been confined within national boundaries and illuminates how Plains Indigenous peoples like the Metis were at the center of both the unexpected accommodations and the hidden history of violence that made the “world’s longest undefended border.”