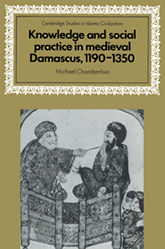 Michael Chamberlain focuses on medieval Damascus to develop a new approach to the relationship between the society and culture of the Middle East. The author argues that historians have long imposed European strictures onto societies to which they were alien. Western concepts of legitimate order were inappropriate to medieval Muslim society where social advancement was dependent upon the production of knowledge and religious patronage, and it was the household, rather than the state agency or corporation, that held political and social power. A parallel is drawn between the learned elite and the warriors of Damascus who, through similar strategies, acquired status and power and passed them on in their households. By examining material from the Latin West, Sung China and the Sinicized empires of Inner Asia, the author addresses the nature of political power in the period.