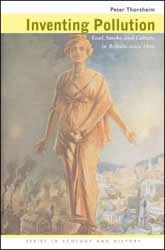 Going as far back as the thirteenth century, Britons mined and burned coal. Britain’s supremacy in the nineteenth century depended in large part on its vast deposits of coal, which powered industry, warmed homes, and cooked food. As coal consumption skyrocketed, the air in Britain’s cities and towns filled with ever-greater and denser clouds of smoke. Yet, for much of the nineteenth century, few people in Britain even considered coal smoke to be pollution.

Inventing Pollution examines the radically new understanding of pollution that emerged in the late nineteenth century, one that centered not on organic decay but on coal combustion. This change, as Peter Thorsheim argues, gave birth to the smoke-abatement movement and to new ways of thinking about the relationships among humanity, technology, and the environment.

Even as coal production in Britain has plummeted in recent decades, it has surged in other countries. This reissue of Thorsheim’s far-reaching study includes a new preface that reveals the book’s relevance to the contentious national and international debates—which aren’t going away anytime soon—around coal, air pollution more generally, and the grave threat of human-induced climate change.