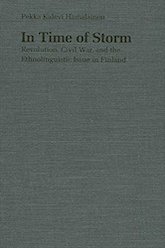 At the end of World War I in many European societies, hitherto hidden or suppressed rivalries and tensions between competing socioeconomic and ethnolinguistic groups burst to the surface in violence, revolution, civil conflict, and civil war. The author of this book attempts to make a contribution toward the unraveling of these phenomena by exploring them within the context of one European society, Finland, and analyzing the complex and intertwining relationships between revolution and civil war on the one hand and ethnolinguistic and socioeconomic cleavages on the other.