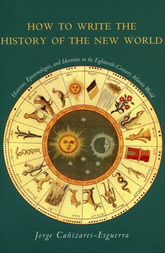 Jorge Cañizares-Esguerra. How to Write the History of the New World: Histories, Epistemologies, and Identities in the Eighteenth-Century Atlantic World. Stanford University Press, 2001.

In the mid-eighteenth century, the French naturalist Buffon contended that the New World was in fact geologically new—that it had recently emerged from the waters—and that dangerous miasmas had caused all organic life on the continents to degenerate. In the “dispute of the New World” many historians, naturalists, and moral philosophers from Europe and the Americas (including Thomas Jefferson) sought either to confirm or refute Buffon’s views. This book maintains that the “dispute” was also a debate over historical authority: upon whose sources and facts should naturalists and historians reconstruct the history of the continent and its peoples?

The author traces the cultural processes that led early-modern intellectuals on both sides of the Atlantic to question primary sources that had long been considered authoritative: Mesoamerican codices, early colonial Spanish chronicles, and travel accounts. In the process, he demonstrates how the writings of these critics led to the rise of the genre of conjectural history. The book also adds to the literature on nation formation by exploring the creation of specific identities in Spain and Spanish America by means of particular historical narratives and institutions. Finally, it demonstrates that colonial intellectuals went beyond mirroring or contesting European ideas and put forth daring and original critiques of European epistemologies that resulted in substantially new historiographical concepts.